Double Feature Monsters U and EPIC

At the Drive In
Originally we planned on going out to the drive in too see Monsters U on Friday but the weather was a little iffy so we put it off till last night. We go to movies kinda frequently but it does sometimes get close to budget when all 7 of us go. I found that there were like 3 drive ins pretty close to home and the prices were much better.
After checking websites, showtimes, prices, etc we decided to go to the Ruskin Family Drive In. We packed a small cooler with drinks and a few snacks and packed the truck up with blankets. It was about 30/40 minutes away but still not too bad of a drive and definitely worth it. We got great parking and it was not that busy at all. They do have a little concession stand and restrooms in the middle of the lot which is great because its not too far from anywhere in the park. You can either sit in or out of your vehicle, we chose to throw some blankets down and sit outside since it made it easier for when the babies started to get antsy. I don't normally have bug spray handy but there happened to be some in the truck so I did spray everyone down a bit just in case the bugs were out, which they were. The lady next to us had pizza and offered some to the kids but they had just eaten dinner. Was very nice of her though.
My oldest son was at a friends for the night so it was myself, my husband and 4 of the kids. Admission was $20.00 for all of us ($6.00 ages 9 and up and $1.00 for 5-8 years).
But what made it even better was that they offer double features so we were all getting to see Monsters U and Epic.
BEST IDEA EVER!!

We saw the trailer for Despicable Me 2 which comes out July 3rd and Pixars Planes which is out August 9th. Both of which we will be going to see. I think we are going to make this movie night at least once a month now. 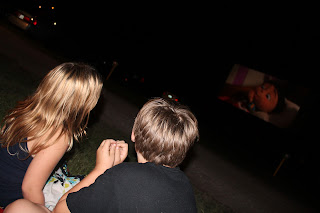