Disclosure: I got this product as part of an advertorial.

This is probably going to be one of the fastest turn around times for a review for me. We just received the box in the mail a few hours ago and it is now 8:30(ish)pm on Saturday and I am finishing up this post to publish.

My youngest (4yrs old), Emmaleigh has had a sore throat for a few days now. I hate when my throat is sore, even a little bit, so I keep asking her if hers is ok or hurting at all. I took her with me a few days ago and she picked out her own cough drops. She has also had a good amount of milk and orange juice but as of this morning her sore throat was still around. She was not too impressed with the orange cough drops she had picked out. They were hard and she didn't like the taste too much. She didn't like that she wasn't supposed to chew on them and she didn't like how long it took to melt away. It all turned into a sticky mess. She maybe had 2 or 3 and that was it, the bag is now in the bathroom with the other medicines on the top shelf.
Pine Bros Softish Throat Drops came today and I showed them to her. I didn't think she would be too much for trying them because of the medicine-y taste she didn't like with the cough drops. She liked the little puck container better than the bag so she has since claimed hers and they are on her bathroom shelf. I had her try one of each flavor we received, Natural Honey and Wild Cherry. She loved the cherry. I think she just liked the color of it more but she there were no complaints of it being yucky tasting. She did not have to take the piece out because it was too hard and took too long to eat. She has not complained or said anything about her throat in the past two hours since she took them so I think that is a good sign. I am happy she liked them and happy they did work for her.
I had two of the older kids try one of each flavor also just to see if they would like them. Tierney liked the Wild Cherry and Ben liked the Natural Honey. They both said they tasted good and they didn't think they tasted like normal cough drops. The flavor was not too overwhelming and they didn't taste like medicine. They were hard and crunchy and they didn't have to be just sucked on. The drops are gummy consistency which is great for adults and kids.
Product received: Wild Cherry bag, Wild Cherry puck, Natural Honey bag, Natural Honey puck.
Nutritional information: (from the site, for what we received) Wild Cherry and  Natural Honey

Overall: I will be purchasing these once we run out. I might actually stock up on them now because I have seen a few places/reviews online where people are saying they can not find the flavor they want. The consistency was good and for all ages as was the size. The flavor was not too strong and you could not taste the medicine aspect of them at all, in my opinion as well as the kids. These are not cough drops, but throat drops and they do what they say they do. They help relieve sore throat pain and discomfort. They do help with the coughing aspect as well but not a normal "cough drop."
Company/Product information: Flavors available are Natural Honey, Wild Cherry, Licorice, and (soon) Lemon-Citrus. They can be purchased directly through the Pine Brothers website or retailers like CVS Pharmacy, Drugstore.com, Rite Aid, Kroger, Meijer, and Albertson's to name a few.

We did get the bags and the puck but I think we are just going to use the bag to refill the pucks once they are empty. Each bag contains 32 drops and each puck contains 26 drops. Plenty to last! 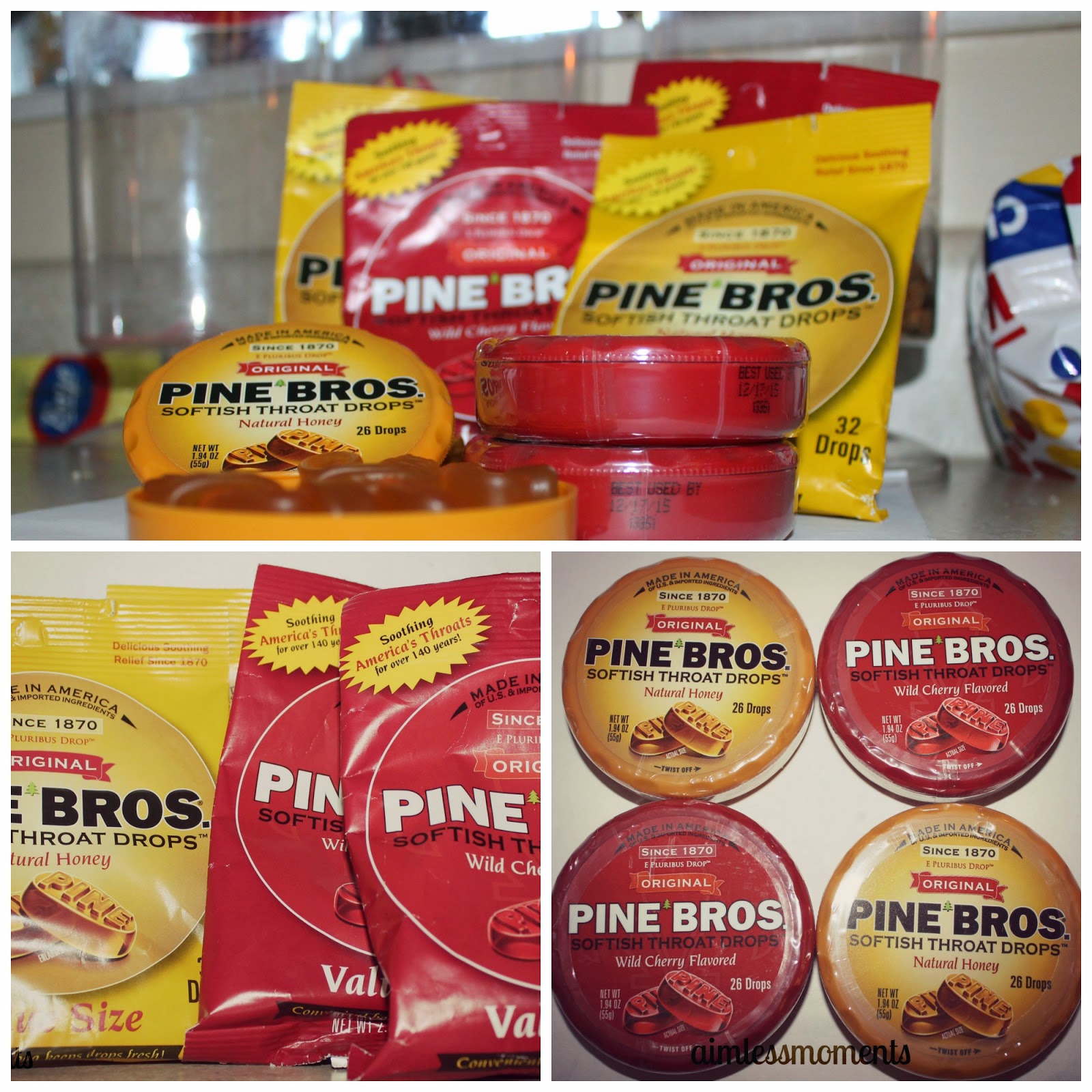 A little background and history of the company and the product.
Ulysses S. Grant was President, the population of America was at 39 million, and the telephone was still a dream, when in 1870 J. Herman Pine hung out a confectionery shingle on 8th Street above Walnut in Philadelphia and, along with his brother, sold their first batch of what they called 'Pine Brothers Glycerine Tablets.' In an attempt to relieve his own sore throat and those of his family members, Mr. Pine, a former German confectionery maker, determined that by combining the soothing natural qualities of glycerin with the healing properties of gum acacia, he could sooth and mitigate the mild discomfort of a sore throat. Add in some natural flavoring and a sweetener and Pine Brothers Softish Throat Drops were born. "I have discovered something," Pine wrote, "which will give quick throat relief to thousands afflicted as I was." He added, "Perhaps I won't make much money out of this but I can make people happy, and that's more important than money." Mr. Pine was being unduly modest, as his "discovery" would become one of the most successful, most delicious, and most unique throat lozenges in the world. The recipe has not changed since it was first introduced to the public over 140 years ago.
In 1930, Pine Brothers was sold to the Life Savers Company and continued to grow. Known for its 'soft drop consistency,' Pine Brothers lozenges became a favorite of adults and children. The product, which attracted the healthiest sales in the eastern and northern states, due to the icy winters, reached its peak popularity in the 1970's, The company was sold by Life Savers and then, resold a few more times. Despite the loyal consumers, marketing became non existent and sales declined.
Pine Brothers has recently been acquired by the creator and former owner of Airborne, Victoria Knight-McDowell, for her new company 3 Sisters Home Products. Much time and effort has been spent locating the original Pine Brothers recipes, redesigning the packaging, and creating an existing yet classic look. Pine Brothers in once again being made in America and was launched nationally in fall 2011. Mr. Pine has succeeded yet again in "making people happy."

I received one or more of the products mentioned above for free using Tomoson.com. Regardless, I only recommend products or services I use personally and believe will be good for my readers.
Labels: Got it free medications product love products Review sick kids Tomoson