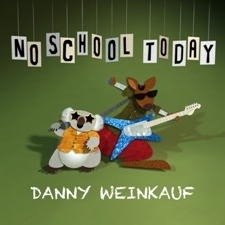 No School Today is a very catchy group of songs for kids but parents seem to enjoy it to. Imagine letting your kid(s) take the day off from school, throwing the cd in, and dancing around the living room! Sounds like a great reason to miss a little school...shhh!

About the music and the makers:
GRAMMY Winner Danny Weinkauf (of They Might Be Giants fame)
Releases First Solo Family Music Album:No School Today
See new video on YouTubeAvailable on April 29th (Idlewild); Guest stars include Laurie Berkner and Hank GreenLynbrook, NY , March 14, 2014 – Danny Weinkauf, longtime bassist with They Might Be Giants, whose song “I Am a Paleontologist” became the anthem for young scientists everywhere, will release his first solo family music album, No School Today, on April 29th (Idlewild).With 16 original smart-pop tunes, No School Today covers topics from marsupials to voting rights, spelling bees to the four food groups and even a song about Ben Folds.  The rousing rocker “Oh No Oh Yeah” is just perfect for when the day spins out of control, and “Cast My Vote” is a kid-centered ode to exercising our democratic rights. “Champion of the Spelling Bee” debuted in 2011 in an ESPN TV feature about the Scripps National Spelling Bee. The song “Archaeology” is an inspiring follow-up to Danny’s hit tune “I Am a Paleontologist” (featured on They Might Be Giants’ GRAMMY nominated album Here Comes Science). The new song was inspired by fan requests. “Several times after a Giants show, people would come up and tell me how much they liked my “Archaeology” song. They were confusing the title of ‘Paleontologist,’ but I decided to honor them by writing another song,” he says.Guest performers include Danny’s son Kai, daughter Lena, wife Michelle, and family music superstar Laurie Berkner. The album also features a bonus track, “The Kidney That Lived in Four People,” based on a true story, and written and recorded with additional guest Hank Green of the VlogBrothers. Danny produced the album and plays all the instruments himself. Jeff Thall (Bryan Ferry, John Cale) mixed the recording, and Tom Durack (Chic, B52s) mastered it.Fans are eagerly expecting their albums. Crowd-funded, No School Today met its initial Kickstarter goal in only five days and ended the campaign 160% funded. A music video for the song “Marsupial” will debut in early April, and more videos will be coming around the release date.A multi-instrumentalist, songwriter, producer, and Grammy-winner, Danny Weinkauf has also written for television and film, including music for "Malcolm in the Middle,” "*** and the City,” “Jon & Kate Plus 8,” “***** Eye for the Straight Guy,” “The Ellen DeGeneres Show,” ESPN, and CBS Sports. In addition to his work with They Might Be Giants, Danny has recorded with Fountains of Wayne, Candy Butchers, David Mead, and Lincoln. His song, “I Am a Paleontologist,” from They Might Be Giants' Grammy-nominated Here Comes Science, was featured in a national advertising campaign for Payless, and it’s the soundtrack for museum exhibits around the world.  Nick Jr. and Sprout TV superstar Laurie Berkner sings along  on the sweet and catchy “Our Love Fits,” which was co-written with Ellen Degeneres Show director Suzanne Luna.Danny reports that the process of writing and recording the songs for No School Today was exhilarating. He’s already got a new batch of songs ready for his next solo release. “It's really great fun to try and see the world from a kid's perspective. Musically, I feel like the sky’s pretty much the limit, like working in a room without a roof,” he jokes.No School Today will be available via Idlewild Recordings with distribution by Megaforce Records and Sony/RED. This is the first Idlewild album by an artist other than They Might Be Giants.More information, tour updates and streaming songs are available at: http://www.dannyweinkauf.com.Follow Danny on Twitter @poplives1 and Facebook.


Disclosure: I received one or more of the products mentioned above for free using Tomoson.com. Regardless, I only recommend products or services I use personally and believe will be good for my readers.
Labels: kid music kid songs lyrics music music for kids Review school Tomoson