What Is Memorial Day

There are alot of posts going around already for the Memorial Day weekend and I just wanted to share that there is a difference between the days.
This weekend, mainly Monday, we celebrate Memorial Day.
This is a day to remember all those that lost their lives while serving. I do have alot of military ties in my family history, which I have been recently been trying to piece together. Gratefully though, all those that served that I know personally made it back home. The same can not be said for thousands, and thousands of those that paid the ultimate price.
Please take a moment from your beach bbqs and remember that the reason you are here is because they put their lives on the line for all of us, for generations and generations. 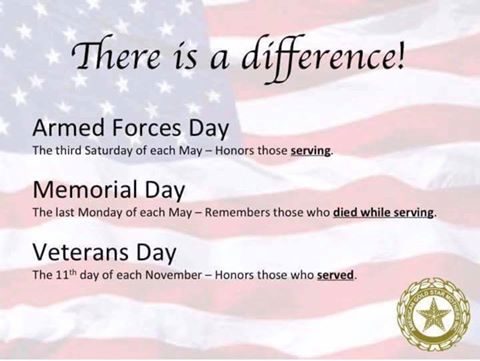 In May 1868, General John A Logan, the commander in chief of the Union Veterans Group, known as the Grand Army of the Republic, issued a decree that May 30th should be a nationwide day of commemoration. More than 620,000 soldiers had been killed in the Civil War and on Decoration Day, as it was formally and originally called, Americans should decorate the graves of the war dead "whose bodies now lie in almost every city, village, and hamlet churchyard in the land."
From the stories, Logan chose May 30th because it was a rare day that didn't fall on the anniversary of a Civil War battle but some others say it was because this date would allow for flowers across the country to be in full bloom. After the war, Logan, who also served as a US Congressman before he resigned and rejoined the Army.
When he died his body laid in State in the rotunda of the United States Capital. He is 1 of 33 that have received that honor.
Today Logan Circle in Washington DC are named in honor of this veteran who stood up for those killed in battle.