And Sometimes Your Kid Publishes A Book

This kid! This kid that drives me crazy more minutes out of the day then I sometimes even think there are, keeps me worried and stressed, that goes back and forth with grades and attitudes and levels of trouble.
He did something great!
He is now a published author. He is 1 of 66 authors in a book that launched on Sunday. Human Rights is a compilation of some of the freshmen in his 9th grade AVID class. This book was a month long project that started as a human rights writing workshop. With the idea to turn their work into a published book from his teacher, Mrs Darbois.
Going into the book signing and launch event we didn't really think of the scope of it until the principal got up and asked the adults to raise their hands if they were published authors and there were about 6/7 hands raised (out of approx 100-ish).
Then it was mentioned that the books would be on sale on Amazon and at Barnes and Noble in a few weeks. It's one thing to have a book available locally at your school but to know it is going to be available everywhere is an incredible opportunity and a great success, especially for Ben. I am super proud of him and as much as I would love to take any credit for how well he did I honestly can't, this was all him and all his work and creativity. 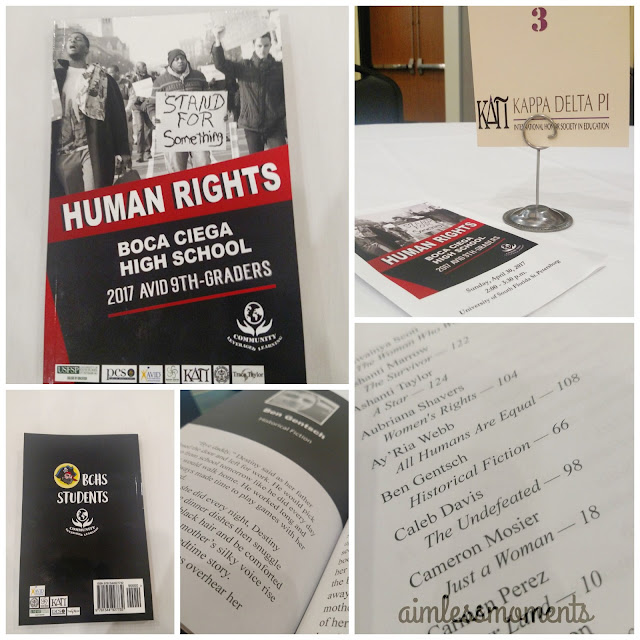 From the USF St Pete site:
"The publication of the book will be celebrated at a book signing event from 2 to 4 p.m. on April 30 in the USFSP University Student Center. The event, which will showcase the work of the student authors who will autograph copies of the book, is a collaboration between the USFSP College of Education, Boca Ciega High School, the USFSP Bishop Center for Ethical Leadership, Kappa Delta Phi, and the nonprofit Community Leveraged Learning."